So a few weeks ago I was playing Borderlands: Game of the Year Edition and I was spectated by an OnLive representative. This happened during their first anniversary celebration, where they were randomly handing out prizes to people playing games using OnLive. I was contacted a few hours later via e-mail saying that I won a free t-shirt.

I replied with my info, but unfortunately they didn't have my shirt size. They offered me an alternative prize, an OnLive beanie hat, which I eagerly accepted. I like the idea of a hat better than a shirt anyway.

Well, my package arrived yesterday, and I'm very happy with my new hat. Even better, there was a bonus! In the envelope I found a "VIP PlayPass" card with a code on the back that will enable me to purchase ANY one game on the OnLive service free of charge. That I was not expecting, and to say that I was excited would be an understatement. The best part is that this code does not expire until December 31st, 2011, 11:59 PST (or January 1st, 2012, 2:59 EST where I live). I plan to hold on to that card for a while and use it on a new game I REALLY want.

The package also contained some OnLive stickers. Haven't decided what I want to stick them to yet. If I ever get an iPad one is definitely going on that. Anyway, here's a pic of my haul! 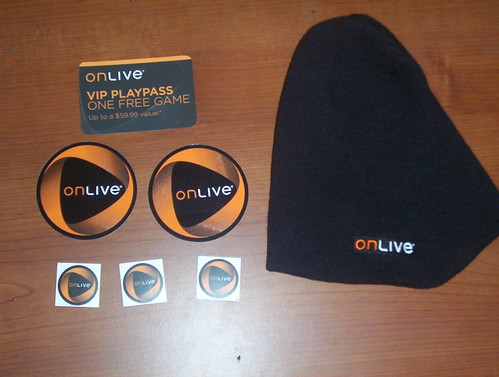 They really didn't have to give me such a great gift just because they changed my prize from a shirt to a hat. That was so very awesome of them, I'm almost speechless. I wrote them an e-mail thanking them profusely, and I'm wondering what I'll end up using my VIP PlayPass on.

OnLive runs so many crazy promotions and deals that I have a bunch of discount codes at the moment. I have 2 codes good for 50% off my next purchase and one code for a free game, in addition to the VIP PlayPass I just received. I am not ashamed to say that OnLive has made a hypocrite out of me. In an earlier entry in this journal I flat-out stated that I would NEVER buy an OnLive game, and now I might actually own more OnLive PlayPasses than I do games on my Xbox 360! The deals are friggen insane!

I'm definitely not selling my Xbox any time soon, but OnLive has become the gaming company I most want to see succeed.
Collapse